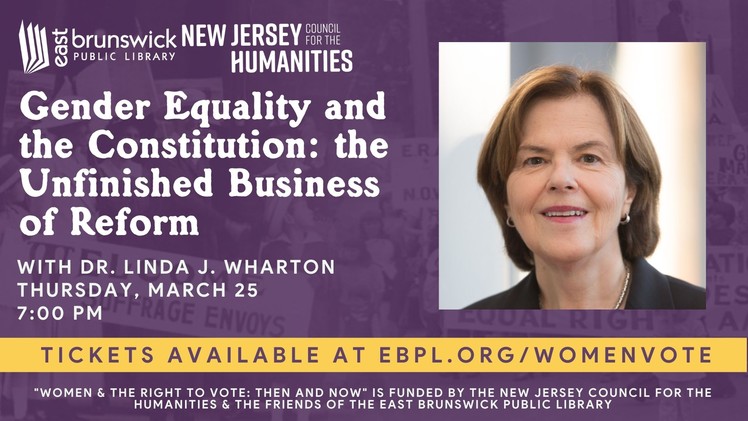 
Join us for our women's suffrage series in March.
Learn More

The first program “Alice Paul: Crusader for Equality” is on Tuesday, February 23, at 7:00 pm and hosted by the Alice Paul Institute. Paul was one of the most influential women in 20th-century America, leading the final fight for women’s suffrage and championing equal rights for women.

Her story will be told through original photos from her personal collection, highlighting her roots in the New Jersey Quaker community to her work for the Equal Rights Amendment.

The second program in this series will be a virtual crafting workshop with fiber artist Pam Brooks. The project will be making a women’s suffrage rosette, a symbol of the suffrage movement, on Thursday, March 18 at 7:00 pm. There will be a random drawing for a limited number of free supply kits.

To end the series, Stockton University professor Linda J. Wharton hosts “Gender Equality and the Constitution: The Unfinished Business of Reform” on Thursday, March 25 at 7:00 pm. She will discuss the renewed push for ratifying the Equal Rights Amendment and explain why expanding protection for gender equality is needed now more than ever.

Wharton was featured in the recent documentary film on the ERA, Equal Means Equal.  She is the former Managing Attorney of the Women’s Law Project in Philadelphia where she served as lead co-counsel before the United States Supreme Court in Planned Parenthood v. Casey, in which the Court reaffirmed the core principles of Roe v. Wade. Her scholarly work on the positive impact of equal rights amendments in state constitutions has been widely cited.

These three virtual programs are free and open to the public, and closed captioning will be provided. To reserve your seat, visit the library’s website at www.ebpl.org/womenvote or call the library at 732-390-6767.

Seeking AAPI Art for May Exhibit