Join us for a screening and discussion of American Creed, followed by a facilitated discussion on the Act and current events led by Dr. Sylvia Chan-Malik, Associate Professor of American and Women’s and Gender Studies at Rutgers University.

Former Secretary of State Condoleezza Rice and Pulitzer Prize-winning historian David M. Kennedy come together from remarkably different backgrounds, life experiences and points of view to explore the idea of a unifying American creed. Their spirited inquiry frames the stories of a range of citizen-activists striving to realize their own visions of America’s promise across deep divides.

American Creed premiered in February 2018 and was one of the most widely carried PBS documentaries of the year. The documentary relaunched in November 2018, followed by an all-new short film featuring teenagers whose perspectives on American ideals and identity have been influenced by seeing the documentary. Check your local listings for PBS showtimes, or watch American Creed here now.

With support from the Corporation for Public Broadcasting, the film’s launch marked the beginning of a public engagement campaign including community conversations, classroom activities and local storytelling in cities and towns across the country — all designed to foster a bold national conversation about American ideals and identity.
Tweet 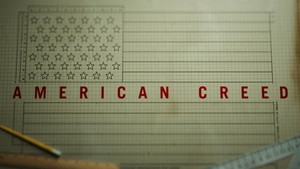